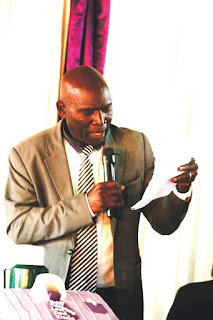 ZVISHAVANE - After serving for 48 solid years in the education sector starting as a teacher until he became a headmaster, educationist Zebias Zingoni has finally called it a day.
Zingoni began his teaching career in 1972 where he taught at Gaths Mine School up until 1981. He then joined Shabanie Mine Primary School in 1982 as the deputy head before assuming the role of acting head at Kandodo Primary School in Zvishavane from 1989-1990.
Upon leaving Kandodo, Zingoni became the deputy head at Shabanie Primary School for the eight years that followed. In 1999, Zingoni took over Mapazuli Primary as school head for two years before rejoining Shabanie Mine Primary School in 2001 till 2018.
Zingoni reached the legal age of retirement in public service while serving as school head at Shabanie Mine Primary School.
The school staff bade him farewell with an impressive party where teachers, parents and students had all but wonderful words to describe Zingoni.
Chairperson of the School Development Committee (SDC) at Shabanie Mine School, Mapfumo Muroyiwa said that Zingoni was a great leader who spearheaded a number of successful projects at the school.
"As the SDC we worked very well with Mr Zingoni. I joined the SDC in 2013 and became the chairperson in 2015. It was then that we sat down with Mr Zingoni and began projects for the school that will forever be his legacy.
"In 2016, we managed to purchase the school bus, build an Early Childhood Development (ECD) block with four classes, refurbished and constructed toilets at the school as well as mount Jojo tanks to supply water around the school.
"We expect to continue working well with the incoming school head as we were doing with Mr Zingoni. We were always transparently updated as parents on how school funds were being utilized and we are glad that Mr Zingoni is retiring with no bad record or accusation of corruption," said Muroyiwa.education