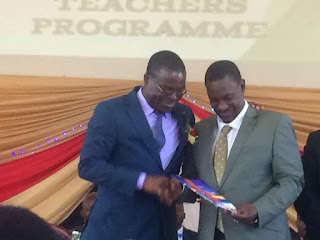 Gweru – Mkoba Teachers College recently launched the science teacher programme under the government pre requisite programme of training science teachers for national development.
In his welcome remarks at the official launch, Minister of State for Midlands Provincial Affairs, Owen Ncube, said the programme will go a long way providing science teachers from marginalised areas like Gokwe and Mberengwa among others.
"I am glad to say the programme will help in the areas such as Gokwe and Mberengwa as they will benefit and get science teachers.
"So to the aspiring science teachers I say grab this opportunity because fortune knocks once at your door," said Ncube.
He emphasized the need to have scientists who are guided by strategy to transform the economy and propagate effect development.
"In order for us to fulfil the vision of achieving the middle income economy by 2030 in Zimbabwe, we need to have scientists who are guided by strategy to transform the economy.
"While the programme will be launched here, it will also be conducted at Masvingo Teachers College and Joshua Nquabuko Polytechnic. As Midlands we feel honoured to be chosen as the launch pad of this innovative programme," said Ncube.education
Share !