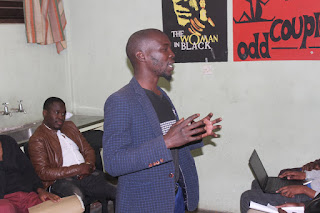 Majoni makes a point during the dialogue meeting

Clayton Shereni
Zanu PF and MDC Alliance aspiring candidates for Ward 7 in Masvingo Urban, Talent Majoni and Richard Musekiwa, on Friday, July 20 shared a platform to sell their plans for the populous ward.
The two youthful candidates, alongside candidates from other wards, were pannelists at a Tell Zimbabwe-organised public dialogue meeting at Charles Austin's Theatre. They talked about many things including their pledge to make sure that the long-talked-about Rujeko Footbridge project is eventually implemented.
Musekiwa is the sitting councillor, who is seeking to defend his seat against a determined Majoni and other competitors.
During the meeting, Musekiwa reveled in what he said were the success stories of his current term which saw the resurfacing of some main roads in his ward.
He said he would continue lobbying for the resurfacing and upgrading of roads in Rujeko if re-elected on July 30.
"I successfully lobbied council to resurface Ingwe Drive and facilitated for the construction of eight classroom blocks at Rujeko and Shakashe Primary schools. If you give me another chance in office, I would continue on the same path," said Musekiwa.
Through his effort, he said, council identified land for the servicing of 1700 stands for a new suburb to be known as Rujeko D, with plans already in place to build a new secondary school to service the whole of Rujeko and beyond.

"We have identified more than 1700 residential stands for the Rujeko D housing scheme and the site plans are already in place. As council, we will take up the task of building a secondary school in Rujeko since government and churches have failed to assist in this regard," said Musekiwa.
In his own presentation, Majoni said he was already involved in many successful community projects even though was not yet a councillor.
"In Rujeko, I facilitated the spraying of mosquito-infested swamps and grassy areas. I have also helped to train women in such skills as floor polish-making through the ministry of Small to Medium Enterprises (SMEs).
"I also want to set up a community development trust which will be constituted by pastors, college students and politicians from all parties. It will be truly partisan and designed to serve the community. Even Musekiwa will be involved in that trust. I also want to see Rujeko Footbridge being built without further delays. Council must budget for that," said Majoni.
The dialogue also was attended by many aspiring councillors including Godfrey Kurauone (MDC Alliance, Ward 4) and his strongest rival, Tavara Mudukuti of Zanu PF as well as Ward 5 independent candidate, Enock Mapondo.politics