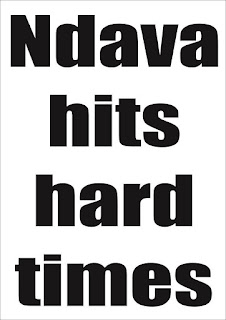 CHIREDZI - Zanu PF provincial secretary of information and former Chiredzi North Member of Parliament (MP) Ronald Ndava seems to be facing serious financial problems with the Sheriff of the High Court recently confiscating his property for failing to pay US$20 000 to Farmec.
Ndava's company, R&G Tractor has since gone broke while title deeds to his US$100 000 house are being held by credit services provider, Microcred Zimbabwe, which he owes US$40 000.
The former MP has had a rough patch in his life especially ever since he lost to current MP Robert Mukwena in the 2013 Chiredzi North Zanu PF primaries.
Ndava's spirited attempts to stage a comeback in the recent party primaries of the constituency failed after the race was won by Roy Bhila.
Adding to his woes, Ndava has since been fired from his offices in Msasa Drive, Chiredzi, for failing to pay U$6 000 rentals and has sold his tractors in order to recover the other property he had lost after failing to pay the US$20 000 debt owed to Farmec.
This publication saw summons indicating that in 2017, Ndava entered into a written agreement with Microcred by which he was lent US$40 000 which was supposed to be repaid within a period of one year in monthly instalments of US$4 676.86.
"On the 31st of March 2017 at Masvingo, Plaintiff and defendant entered into a written loan agreement, a copy is attached hereto as "A" the material terms of the agreement were as follows,..The plaintiff lent and advanced a loan of $40 000 to the defendant.
"The defendant would repay the loan in monthly instalments in the sum of $4 676.26 commencing on the 15th of May 2017. The loan would be repaid over 12 months. That interest would accrue at the rate of 5.2% per month (inclusive of insurance 0.2 %) on the daily balance outstanding from time to time," read part of the summons.
In March this year, Ndava was summoned to answer the claim of Microcred that he still owed them US$22 863.56 plus interest, collection commission and costs at attorney to client scale.
"You are hereby summoned that you do within fourteen days after service of this summons upon you enter or cause to be entered with me, and also the plaintiff's legal practitioner at the address specified herein an appearance to answer to the claim of Microcred Zimbabwe...The plaintiff herein for the sum of USD22 863.56 plus interest, collection costs at attorneys scale," the summons further read.
Mocrocred is currently holding the title to House Number 304 Inyathi Road belonging to Ndava whose company was forced to vacate its Msasa Drive offices for failing to pay US$6 000 rentals.
The company is barely surviving after it sold asserts to repay part of the debt.
Most successful business people in the Lowveld are members of the ruling party and they have to remain in good standing with the system if they are to stay afloat.local