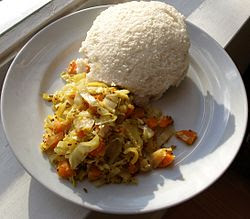 MWENEZI - Patients at Neshuro District Hospital have pleaded with Mwenezi East Member of Parliament (MP) Joosbi Omar to help them get better meals, saying the food they were getting was very bad.
Omar made a visit to the hospital recently and listed to sad stories of the same unappetising meals being served to patients every day.
"It's either sadza or rice with poorly prepared beans or cabbage every day. Now these are people who are not in good health, meaning their appetite is low. They need properly prepared meals for them to eat," said one bedridden elderly woman.
Others pleaded with Omar to source milk for them, saying that would make a better alternative to cabbage and beans.
"It would be better if we are served sadza and sour milk. Patients would find such a meal more appetising than what they are getting now," said another female patient.
Omar later told TellZim News he will donate two beasts to the hospital so that they could be slaughtered and the meat served to patients.
"I pledge to give two cattle to this important hospital. A good diet is important in the recovery of patients. Some of them are lying there and getting worse because they are cannot take the food that is served there," said Omar.
Last year, the legislator helped repair the hospital's two ambulances that had broken down.health
Share !