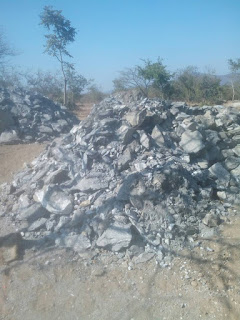 Alexio Rashirai
While asleep one summer night, Paradzai Kanopupa of Mushawembiri village in Rushinga had a dream of his late father telling him there was abundant gold in their field.
"At first I just ignored it as just another dream but my father kept coming back in my dreams. At first, it was alluvial mining but we have now moved to digging some pits," Kanopupa says, pointing to two drilling machines.
Large dug out pits gaze up to the sky with heaps of dump ore surrounding them. An excited Paradzai jumps into one of the open pits, picks a stone the size of a palm which he claims is full of gold and pauses for a picture.
The site now has two diesel air compressors that are used by rock drill operators. There are also dozens of plastic shacks where workers live.
"We have 120 people now working at this site. We have created employment and all these people mean several more households have livelihoods. We employ people from around this area," says mine secretary, Shushai Nyamuzhanda.
At the mining site, one is allocated a small area to dig and he becomes the pit owner who pays a percentage of his earnings to the claim owner. The pit owner employs his own people – usually not less than five – whom he pays and provides with food.
If they dig and hit rock bottoms, a drill will then be put to use, with the pit owner paying for the explosives, fuel as well as the drill operator's wages.
The ore is crushed at the site and 28 pits have already been allocated.
The country's mining sector contributes about 13 percent of the GDP and accounts for 68 percent of exports, with small scale mining now contributing an increasing amount to the total output.
Government recently decided to recognise small scale miners, commonly referred to as makorokoza, and help them legalise their work while making it mandatory for them to sell their gold to State-owned buyer, Fidelity.business