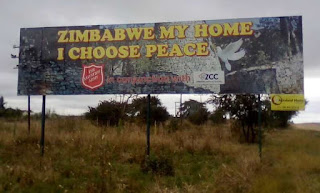 The Salvation Army has added its loud voice to ongoing calls for a peaceful pre and post electoral environment this year.
This comes after political leaders and the Zimbabwe Council of Churches (ZCC) made similar pleas as the nation approaches the intensely-contested elections.
As part of its own efforts, the Salvation Army in Masvingo has erected a massive billboard close to Exor fuel station with a message 'Zimbabwe my home, I choose peace'.
A peace video on peace has also been created and posted on YouTube from where some have downloaded and shared it on various other social media platforms. The video can be reached on the link https://www.youtube.com/watch?v=2xrtrfqD_Mw.
Addressing mourners at the funeral of devouted church member Samson Muzvanya recently, Salvation Army Masvingo Division divisional commander, Major Luckson Chimbalanga called upon the church faithful and the broader society to work for peace.
Major Chimbalanga said elections will come and go, but people will still remain as neighbours.
"Elections come and go, but we remain neighbours in our communities. We will still need to use the same table to sell our vegetables on the market even if we differ on political standpoints. We will still need one another tomorrow.
"My word to you is, let's maintain peace in the country and let's avoid fighting even though we have differences. We should respect each other by preparing to vote in peace. Go out to vote in peace, celebrate in peace and accept the results peacefully. Zimbabwe is our home," said Major Chimbalanga.