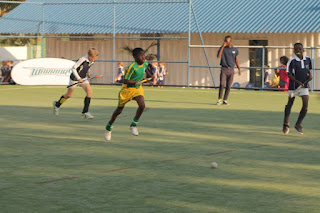 ZVISHAVANE - Shabani, Hartman House and Hellenic Primary schools hockey teams were recently in Zambia for a tournament organised and hosted by Lusaka International Community School (LICS).
Shabani finished as quarter finalists in a tournament that featured such teams as Italian School – who emerged as de-fending champions – as well as Martin House, who finished at number three behind the hosts LICS Warriors, and Musikili.
On the first day, Shabani Primary suffered from fatigue after enduring the over 600 km road journey to Lusaka, un-like their Harare counterparts who flew to the venue.
This year, the tournament was played at two venues; seven matches at LICS and 11 at the Olympic Youth Develop-ment Centre (OYDC).
Shabani Primary's first encounter was against Hartman House and the match ended in a goalless draw.
Hellenic Primary reached the finals and won the seven aside girls and went on to be winners of the other 11 aside matches the following day after beating the hosts in the finals.
Hartman House, who were number seven in the seven aside boys, surprised many by reaching the finals with Musikili in a thrilling encounter where the winner was decided through a shootout after settling for a one all draw.
Speaking after the tournament, Shabani Primary coach, Gordon Munyaradzi Misihairambwi said he was happy with the performance of his boys and girls.
"We have learnt a lot and I think next time, we need to be better prepared. We could have done better if we had brought everybody with us. Some of our key players could not make it to Lusaka and that affected our game plan," said Misihairambi.
LICS Warriors coach, Thomas Mumba said they were happy to be hosts of the tournament.
"I am happy, we have had three schools from Zimbabwe unlike last year when we had only Shabani Primary School. Our visitors gave us a good run for our money and helped to improve competitiveness in the tournament. I hope we will have even more schools from Zimbabwe next year," said Mumba.Local
Share !