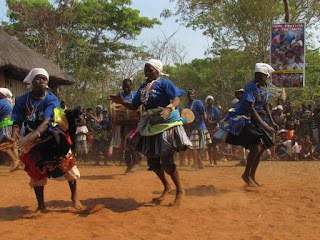 Chokoto dancers during Ndau Festival of the Arts in Chipinge

Stephen Ephraem
CHIPINGE - Cultural tourism, which can be described as travel by which the tourist is concerned with experiencing cultural environments like landscapes, arts, the lifestyle of locals, values, language, religion, traditions and events has gained ground in South East Zimbabwe.
South East region of Zimbabwe consist of Chiredzi and Chipinge districts.
The cultural tourism concept was necessitated by the introduction of culture groupings, leading to the birth of high culture, sub culture, popular culture and global culture. The high culture group is termed as the "upper" class society which does not allow the 'lesser' class to dilute its 'elite' status and is the main consumer of cultural tourism.
Economically, cultural tourism contributes to economies of many countries. According to the World Travel & Tourism Council, a forum for business leaders in the Travel and Tourism industry, in 2014 alone, nearly 1.14 billion people worldwide crossed borders as tourists.
Tourism, directly and indirectly, contributed US$ 7.6 trillion to the total global GDP (Gross Domestic Product). It also created 6.1 million jobs, thus one in every 11 jobs worldwide.
In Zimbabwe, tourism has directly and indirectly contributed US$1.44 billion in 2014 which is 10.4 percent of the GDP. It also generated 181000 jobs directly which is 3.1 percent of total employment.

Socially, regardless of the cultural groupings, cultural tourism has broken the hatred and xenophobia barriers and has promoted peace, friendship and understanding between the host destination and the tourists.

It also helps curb rural migration. Rural communities which have something to market in their culture have a sense of belonging in their environments and do not need to move to other areas for survival or well being.

Cultural tourism helps preserve the cultural and historical heritage to keep attracting visitors. The Karanga people ofMasvingo are a good example of people preserving their culture and heritage through marketing of the Great Zimbabwe monuments.
Cultural tourism helps the host communities to maintain and take pride in their identity. This is a case with the communities of the San people in Tsholotsho who are regard as primitive by some people. To them, there is nothing primitive about their culture.
The south east region of Zimbabwe is a cultural tourism hub packed with Machangana Festival held in Mahenye in Chipinge, Ndau Festival of the Arts held in Bangira, Chikore in Chipinge and Great Limpopo International Cultural Fair held in Muhlanguleni in Chiredzi.
MaChangana Festival
MaChangana Festival brings together Tsonga (also known as Shangani or Xangani) communities surrounding Zimbabwe's second largest national wildlife ornament, the Gonarezhou National Park. It takes place in September every year.
Established in 2010 and bankrolled by award winning conservationist, Clive Stockil of Chilo Gorge Safari Lodge, the inaugural MaChangana gala was held in Chiredzi South and in Chiredzi North in 2011. The third edition took place in Mahenye in Chipinge in 2012.
Due to general elections that were taking place that year, the 2013 commemoration was deferred to the following year. The 2014 event took place in Chief Gudo's area in Chiredzi North. From 2015, the festival is now held in Chief Mahenye's area in Chipinge South.
The MaChangana Festival showcases most of Tsonga cultural practices including cultural villages, traditional food, traditional dressing, traditional dances and traditional hunting ceremonies. The traditional fishing ceremony known as saila is the key feature of the festival.
Ndau Festival of the Arts
Ndau Festival of the Arts (NDAFA) takes place every September and was established in 2013 by Phillip Kusasa of Bangira village in Chikore, Chipinge district. He formed a trust which went on to apply for land to construct a heritage site.
Kusasa's dream became real when the trust received a shot in the arm by the allocation of a hectare of land by United Church of Christ in Zimbabwe (UCCZ) in Chikore. Today, Paiyapo Arts Development and Heritage Centre is the pride of Bangira.
Kusasa works closely Dr Elias Konyana of Great Zimbabwe University, Mr Fred Bandama of Chikore and revered female author of Ndau literature, Mrs Joyce Simango, who published a 90 page Ndau book titled "Zviuya zviri mberi" in 1974.
NDAFA hosts various cultural aspects like research, music and dance, food, costume, paintings, environmental awareness as well as children and women's rights.
The festival has seen high profile government officials like permanent secretary in the Ministry of Tourism, Dr Thokozile Chitepo and principal director, Biggie Samwanda visiting.
Great Limpopo International Cultural Fair
The Great Limpopo International Cultural Fair (GLICF) was established by Herbert Hasani Pikela in Chiredzi. The fair takes place in communities surrounding Gonarezhou National Park and is held in July. This year, it has been deferred to November.
Gonarezhou is part of the Great Limpopo Trans Frontier Conservation Areas which amalgamates it with the Limpopo National Park of Mozambique and the Kruger National Park of South Africa. The Great Limpopo International Cultural Fair derives its name from the trans-frontier park.
The fair showcases mostly Tsonga cultural aspects in food, drink, dressing, agriculture, conservation, music and dance.
GLITF is the cultural tourism flagship of a non-profit making organisation, Centre for Cultural Development Initiatives (CCDI). In addition to the fair, the organisation runs Great Limpopo Cultural Village and Simuwini Conference Centre at Muhlanguleni in Chiredzi.
GLITF draws participants from Tsonga communities in South Africa, Mozambique and Zimbabwe. It has won recognition from the South African Broadcasting Corporation (SABC) and has partnered Zimbabwe Broadcasting Corporation (ZBC) in its marketing drive.
High profile government officials like former vice president, Phelekezela Mphoko, Dr Chitepo and Samwanda have graced the festival in the past years.
Truly, the south east region of Zimbabwe is cultural hub. Its pregnant with tourism packages that await to be delivery.entertainment
Share !