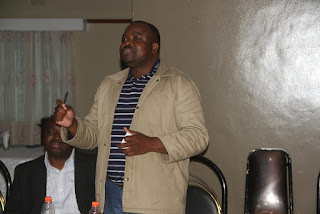 CHIREDZI – Incumbent Zanu PF legislator for Chiredzi West, Darlington Chiwa has said the level of corruption in ruling party is so alarming that he chose to stand as an independent candidate in the July 30 watershed elections.

Addressing the electorate during a press discussion organised by Tell Zimbabwe in Chiredzi recently, Chiwa said corruption in Zanu PF prevented him from fulfilling some of the promises he made in the run up to July 31, 2013 elections.

"I was in a catch 22 situation; I wanted to tackle the rot at our council but the then local government minister had received bribes so he wanted to fire me from the party. Each time I tried to push for a graft probe at Chiredzi council, I would be threatened with expulsion from the party," said Chiwa.

The Chiredzi West legislator said the same kind of corruption manifested during the party's primary elections, leading to Farai Musikavanhu controversially winning the ticket to represent Zanu PF in the elections.

"I don't regret leaving Zanu PF and standing as an independent candidate. I am no longer in Zanu PF and I am very happy about that. Corruption in the party forced me to make this decision; let the electorate choose whom they want to represent them in parliament," Chiwa said.

He also took time highlighting the work he has done in the constituency using the Constituency Development Fund (CDF) he received from government early this year.

He pleaded with the people of Chiredzi West to give him a fresh mandate so that he could push for the implementation of good policies.

"I am glad to say what the other candidates are promising to do, I have already done. I stood with Tongaat and I managed to stop invasions of the company's sugarcane farms. I am therefore seeking a fresh mandate so that I can implement some of these policies in order to ensure that there will never again be land invasions and that there is job security for all Tongaat employees," he said.top news