Zanu PF youths leave nothing to chance in Rutenga 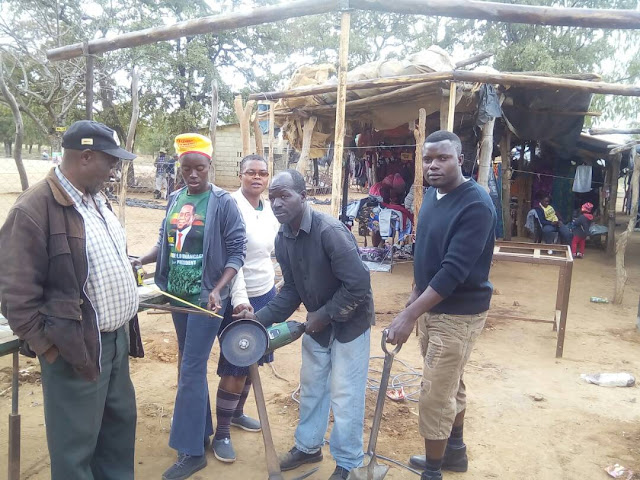 MWENEZI - As the countdown to the July 30 harmonised elections continues, the Zanu PF district youth structures here have upped their campaign in areas deemed to be opposition strongholds, supporting developmental initiatives in Ward 18, Rutenga growth point.
In the recent past, the youths have been doing such activities as clean up campaigns, covering potholes on the ward's roads and providing free labour for the renovation of the Rutenga Flee Market.
Speaking to TellZim News, Zanu PF youth political commissar for Ward 18, Clifford Sithole said they have organised themselves to provide maximum support to the developmental vision of their election candidates.
"So far, we have organised clean up campaigns and we are filling potholes in roads that are within Ward 18. Recently, we also provided free labour when our legislator Joosbi Omar and Councillor Canaan Moyo collaborated to connect taped water to the growth point's public toilets.
"We are now providing labour for the renovation of the Rutenga Flea Market which is being renovated with the helping hand of Cde Omar. After ensuring an inevitable victory for all our candidates in this coming election, we are now confident that several projects that are lined up for the youths will be implemented," said Sithole.
Ward 18 vice youth chairperson, Memory Moyo said although youths in the district did not manage to sail through in the Zanu PF primary elections at local government level, the agenda of young people will still see the light of the day if Zanu PF wins.
She said as youths, they were satisfied with the current winning council candidates regardless of their ages.
Mwenezi district is perceived as a traditional Zanu PF stronghold, with all 18  council seats currently held by the ruling party.
There are, however, such wards as 2, 5 and 18 where the opposition seems to have made some serious inroads.politics
Share !