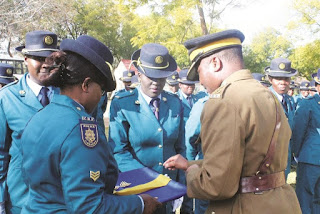 MASVINGO - Hundred non-commissioned police officers were recently promoted to various ranks in the province as the force continues on its restructuring path meant to improve operational efficiency and regain lost public confidence.
The promotional parade took place at Phoenix Base, with 70 constables – 27 males and 33 females – being promoted to the rank of sergeant while 11 sergeants comprising seven males and four females were promoted to the rank of assistant inspector.
Officer commanding Masvingo provincial police, Assistant Commissioner Coneli Dube said the parade was historic and memorable as it was one of the new dispensation's most notable restructuring exercise in the province.
"This is the first such event with me as Propol so I am really humbled. The force is working to improve efficiency and reward hard work. Similar promotions have happened through-out the country so we are pleased that our own officers here have been recognised as well," said Dube.
He called upon all promoted officers to always remember the mandate of the force and comply with relevant ethics to improve services to the public.
Nationally, a total of 1147 constables; 588 males and 559 females were promoted to the rank of sergeant while 176 sergeants with 115 males and 61 females became sergeant majors.
Some 309 other sergeants comprising 163 males and 147 females became assistant inspectors.
Assistant commissioner Dube praised the gender mainstreaming efforts in the force, saying more work was being done to achieve gender balance.local
Share !