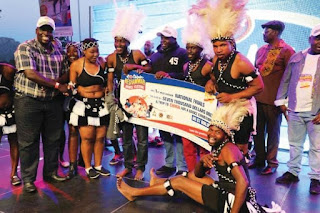 MUTARE - Guruve Marimba Dance group secured a trip to China after being crowned national champions in the nationals of the Chibuku Neshamwari Traditional Dance Festival held in Mutare last week.
The 15-member group, which showcased the dinha dance, walked away with US$7 000 while Makarekare from Mashonaland East and Matabeleland South's Bolamba won US$5 000 and US$3 000 respectively for being the first and second runners up respectively.
Other groups that performed at the competitions were Chabvondoka Zambia Gure Club (Mashonaland West), Maramuro Agure (Harare), Simunye Arts (Mat North), Dhuma Tasangana Arts (Manicaland) Dzimba Dzemahwe (Masvingo), Khaya Arts (Bulawayo) and Mbada Arts (Midlands).
In contemporary dance category, Peter and Vain's Ballerinas Dance won the China trip grand prize and pocketed US$3 000 after outclassing four other competitors.
The Chosen Dance Group and Forgotten pocketed US$2 000 and US$1 000 respectively for coming second and third in the contemporary dance category.
This year's competition was dominated by dinha and Jerusarema dances and all the participating groups performed fascinatingly as if to justify their presence at the national finals.
Guruve Marimba Dance, manager Prince Muzanenhamo told TellZim News that this year's festival was more competitive than ever.
"We play traditional dinha dance and this is our third attempt at the top prize. Competition was tough but we were confident that we would make it because we had been rehearsing thrice a day every day. The money we have won will be used to buy the musical equipment we need. I am sure you have witnessed that we are a large group using few drums," said Muzanenhamo.
Zimbabwe National Traditional Dance Association (ZNTDA)'s vice president, Edson Museka said they were confident that the winning group was going to raise the country's flag high by performing the indigenous dance in China.
"We are happy that the Guruve Marimba Dance group will go and be our ambassadors showcasing what Zimbabwe has to offer," said Museka.
Founded in 1963, Chibuku Neshamwari is sponsored by Delta Beverages through their popular Chibuku brand, and is coordinated by National Arts Council of Zimbabwe (NACZ) and ZNTDA.entertainment