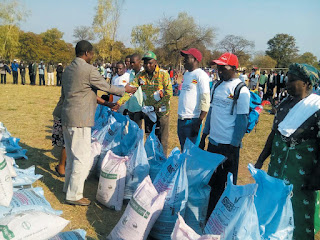 MWENEZI - Cotton output is this year expected to improve more than twofold at the back of rising expectations that the buying price will improve.
In an interview with TellZim News after the handover of seeds to farmers who excelled this season, Cotton Company of Zimbabwe (Cottco) operations manager, Marjorie Chaniwa said she was happy with the sector's performance this year.
She said due to moderate rainfall received this year, the cotton output had significantly increased.
"We are still receiving cotton from our farmers here in Mwenezi. Nationally, there is a marked improvement this year as compared to last year. This is mainly due to the moderate rainfall that were received.
"In Mwenezi district, we received a total of 1 300 tonnes of cotton for the whole of last year. This year, we are still collecting but we have already received 3 330 tonnes," said Chaniwa.
Ward 13 councillor, Takura Mudavose attributed this year's improved performance in cotton output to the free Presidential Inputs Scheme that was extended to cotton farmers.
"Many farmers are beneficiaries of that arrangement and this greatly contributed to the increase in this year's cotton output. Owing to huge expenses that are incurred from the planting up to the harvesting stage, several people had abandoned cotton farming. The Presidential inputs were a relief to many farmers," said Mudavose.
Other farmers said they were not happy with the prices being offered by Cottco, but expressed optimism that brighter days were upon them.
Tinomutenda Malamulele, a farmer in Ward 4, said he was encouraged by the current earnings of between US$120 and US$150 for a bale of cotton.
"I hope cotton farming is going back to its glory days when people would earn a decent living out of the business. Many people here are capable farmers but they had been discouraged by the slave prices of the recent past," said Malamulele.local
Share !