Home » »Unlabelled » ‘Devolution will put Harare in its right place’

‘Devolution will put Harare in its right place’ 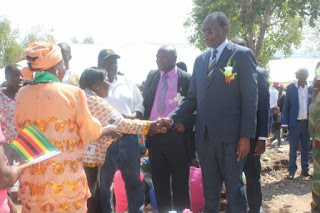 The Minister of State for Masvingo Provincial Affairs, Josaya Hungwe told the people who gathered at the Provincial Heroes Acre for the Heroes' Day celebrations on Monday that government was committed to devolution of power.
Chapter 14, Section 264, of the country's constitution calls for the devolvement of governmental powers and responsibilities as a way of – among many other objectives – giving powers to communities to manage their own affairs and further their own development.
Delivering the President's speech, Hungwe said there would soon no longer be any need for locals to go to Harare for everything they needed.
"Hakuchina Harare, Harare yava kuno kuMasvingo, yava kuBulawayo nekune mamwe ma provinces (there is no more Harare, Harare is now in Masvingo, Bulawayo and other provinces)."
"Directors in Harare used to go on leave and instruct their subordinates not to touch some forms which needed their approval, thereby making processes unnecessarily long," said Hungwe.
He urged people who had proposals with pending approvals in Harare not to lose hope and not to throw them away as they will soon be able to process them locally.
"Keep your proposals; whatever they are for. Soon they will be processed here through the devolution of power being proposed by the President," said Hungwe.
On the following day, Hungwe officiated the Zimbabwe Defence Forces Day (ZDF) celebrations at Mucheke Stadium.
At the event, he read the presidential speech and thanked the armed forces for helping with construction expertise at schools and other public institutions.
Both events were attended by members of the Joint Operation Command (JOC), traditional leaders and other dignitaries.
The 4 Infantry Brigade band and the Mutimurefu Prison Traditional Dance Group provided entertainment at both functions, while thrilling military displays and mock battles were also staged.local
Share !