Elections over, let’s work together: ED 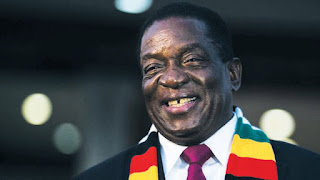 HARARE - Zimbabweans in all provinces recently honoured their fallen heroes and celebrated their armed forces on, with President Emmerson Mnangagwa presiding over the main events in Harare.
The Harare events were attended by thousands of people although they were noticeably fewer than in the previous years when it was Robert Mugabe in charge.
At the National Heroes' Acre, Mnangagwa avoided making comments on the MDC Alliance's ConCourt challenge against his disputed presidential election victory, choosing instead to call upon all citizens to put their differences aside and build the country.
"The new dispensation has opened the country's democratic and economic space and demonstrated that Zimbabwe's democracy has matured. This, however, should never be abused, let's bury our political difference and focus on rebuilding a prosperous Zimbabwe as one family," Mnangagwa said.
The Defence Force Day celebrations were held at the National Sports Stadium, but the event, like any other in the past, did not feature leaders of the opposition who have always complained that such important national events were being abused by Zanu PF to push a partisan agenda.
In his own statement, Chamisa castigated ruling politicians for weakening and dividing the country's defence forces for their own selfish ends.
"Under our new government, the overcharging goal of our military will always be to disrupt, dismantle, defeat and prevent anyone from building capacity to threaten Zimbabweans," he said.
He went further to say at no point should the military be weakened, balkanised and divided into units under the control of self-serving politicians with 'warlord' mentalities.
The army staged a coup last year to save Mnangagwa who had just been fired from his vice presidency position by Mugabe.
On August 01 this year, some two day after the elections, at least six people were shot dead by the army during demonstrations against the Zimbabwe Electoral Commission (Zec)'s alleged delay in announcing presidential election results.top news
Share !