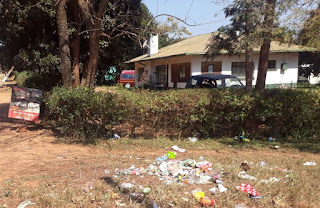 The littered surroundings before Ema's intervention

CHIPINGE - Cross border transporters that ply the Johannesburg-Chipinge route who had been in the habit of dumping rubbish at a lodge in Main Street met their match this week when the Environmental Management Agency (Ema) ordered them to clean up.
Residents of the low density area in the town had been complaining about the transporters' behaviour.
When iTell News visited the lodge on Wednesday, litter had been cleared and the environs of the cross border transporters pick-up and offloading bay was clean. Residents that saw the clean-up exercise as well as neighbours of the lodge praised Ema for holding the reckless transporters to account.
"We have been complaining about the litter for a long time but the buses were resistant. It was bad seeing the transporters bring litter all the way from South Africa to dump it here," said Noah Sigauke, who repairs vehicle close by.
A gardener who works near the cross border transporters bay said it was refreshing to see the scourge of littering declining.
"I always clean my premises but before the end of day, my yard would be filthy once again. They would throw plastics around and the wind would blow those plastics into my place. I hope the transporters shall continue to respect our environment," he said.local