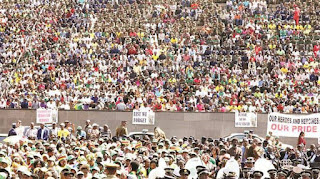 HARARE - President Emmerson Mnangagwa on Heroes' Day blamed the opposition MDC Alliance for the August 01 violence in Harare that led to the army shooting dead at least six people and injuring many more.
Addressing people who gathered at the National Heroes' Acre on Saturday, Mnangagwa said the killings were unfortunate, adding that violence must not be tolerated in the country.
"On 30th of July 2018, you stood and spoke loudly and clearly. You showed the world that not only could we all campaign in a spirit of peace and tolerance, with parties free to campaign whenever, wherever and, however, they saw fit, we equally demonstrated that we could also hold free and fair elections.
"We, however, condemn the MDC Alliance-inspired violence post our free and fair elections, it resulted in the death of innocent citizens. May their souls rest in eternal peace," Mnangagwa said.
Commander of the Zimbabwe Defence Forces (ZDF), General Phillip Valerio Sibanda was also quoted blaming the opposition for the deaths.
"Zimbabwe remains secure despite the recent politically-motivated violence that erupted a day after the harmonised elections on 30 July 2018. That notwithstanding, the country has continued to enjoy peace, security and stability during the harmonised elections.
"Had it not been for evil intentions of some opposition political players who went on to incite violent protests, unnecessary loss of life of six people who were caught up in the unfortunate shooting incidents could have been avoided," he was quoted as saying.
MDC Alliance leader, Nelson Chamisa, however, attacked what he called was government's unwillingness to accept responsibility for its actions.
"The demonstration was done by citizens of Zimbabwe, it was not only our members who participated but the people of Zimbabwe who were calling for a fair and credible result (of the elections) not those artificial results announced by Zec," Chamisa said.
He also said those killed on the day were not even opposition members but civilians who were going about their everyday business.
"Like that lady who had just closed her shop and on her way to her vehicle, got shot from the back, was she demonstrating?" he queried.local
Share !