Home » Top Story » I am not going anywhere - Hungwe

I am not going anywhere - Hungwe 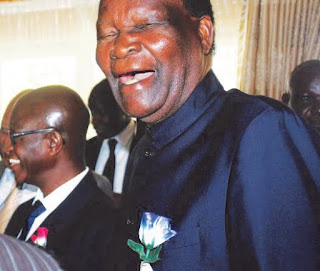 Zanu PF's Masvingo provincial godfather, Josaya Dunira Hungwe, who a few months ago promised to retire from politics if President Emmerson Mnangagwa won the July 30 elections, has made a sudden volte face saying he only made the promise in jest.
Speaking at the commissioning of a 4.1 km stretch of tarred road built by Chiredzi Rural District Council (RDC) in Hippo Valley in May, Hungwe – who is the Minister of State for Masvingo Provincial Affairs – then said he was no longer interested in politics and was just doing valedictory work to put Mnangagwa back into office after which he would go and rest.
"The main issue is that we have to campaign for ED in order for him to win this coming election. Soon after his victory, I will retire from service because there is nothing more I still need on this earth so if he wins, I will retire and leave for heaven," said Hungwe then.
This week, TellZim News made a follow up on Hungwe's pledge now that Mnangagwa had won – albeit not without dispute – only to be amused by the elderly politician saying the promise was just a joke.
"Mnangagwa haasati avepo, handiti muri kupikisa (President Mnangagwa is not yet there, he is being challenged.)," said Hungwe referring to MDC Alliance's Constitutional Court application challenging Mngangagwa's razor-thin victory in the presidential election.
"Ndaitaura zvekuda kufadza vanhu. Handiti makabva makafara (I only made those statements to please people and it seems you were happy) Unenge uri muG40 iwe. (You seem to be a member of the G40)," said Hungwe, referring to the defeated G40 faction which fought tooth and nail to prevent Mnangagwa from succeeding former president Robert Mugabe before the coup of November 2017.
Hungwe is one of the longest serving ruling party official who has been a constant feature in government since independence in 1980. Among his many portfolios in the government, Hungwe has previously served as Masvingo provincial governor for 17 years before bouncing back last year to serve as resident minister following the popular coup.top news