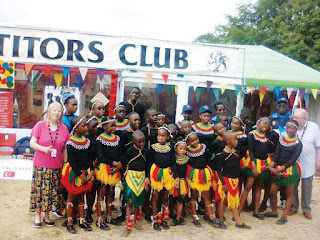 HARARE - Some 25 pupils with Mother Touch group of schools experienced a moment of their lives recently when they visited the United Kingdom from July 03 - 18 for the 2018 Llangollen Eisteddfod where they won prizes in two categories.
Held in Llangollen, Denbighshire, Wales, the annual music festival attracted 4 000 participants from around the world.
The Mother Touch team won awards in the cultural showcase and children's dance categories.
Mother Touch group of schools proprietor, Salome Mutsinze spoke to iTell News upon her return from the European country, saying the school was humbled by the recognition.
"This is our third time to visit the UK and it was such great fun for the children. They got exposed to the outside world thus giving them an opportunity to gain an insight into new cultures and new concepts. We participate every year and this time, we travelled with 25 children, one parent and three teachers.
"We performed very well and the prizes we won are proof that we are heading somewhere good. It is not out of our own meticulous planning or the wisdom of our decisions that we have made this feat, but a result of God's grace," said Mutsinze.
All age groups were part of the Mother Touch team, with Mutsinze accompanying the team fresh from Victoria Falls where she had been named the Zimbabwe National Chamber of Commerce (ZNCC) Business Woman of the Year 2017.
"Let parents bring their children to Mother Touch group of schools where we take our time to learn the needs of all children and their varying capabilities. Ours is a ceaseless effort to bring out the best out of each child," said Mutsinze.
Mother Touch is situated at 2164 Tynwald South, in Harare.local