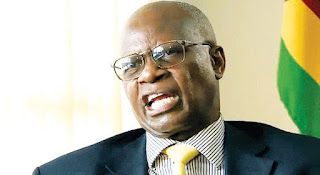 Patrick Chinamasa
…his deputy walloped in Harare East
Shingirai Vambe
RUSAPE- Zanu PF politburo member and Finance minister, Patrick Chinamasa has suffered humiliation after losing his Makoni Central parliamentary seat to MDC Alliance's David Tekeshe.
Figures released by the Zimbabwe Electoral Commission (Zec) showed that Chinamsa polled 9 256 votes against his challenger's 12 531.
Chinamasa had become very unpopular in the constituency as people accused him of not being a good representative, and failing to use his enormous influence in the ruling party and the government to bring development.
He was often accused of only coming back to the people towards elections, and then disappear to Harare when elected into office.
Chinamasa becomes one of the few ruling party bigwigs who lost their parliamentary seats to the opposition in the hotly contested elections.
Labour minister, Petronella Kagonye lost Goromonzi South to Reuben Chikudo of MDC Alliance, Tshinga Dube lost Makokoba to James Sithole of MDC Alliance, and Chris Mutsvangwa failed to win back Norton from independent candidate Themba Mliswa.
Recently, Chinamasa was widely derided after he came to Rusape to preside over the ribbon-cutting ceremony of a skip bin, and pictures of him posing for photographs went viral on social media, earning for himself the nickname 'Mr Bin'.
On his part, Tekeshe received a boost to his campaign when MDC alliance leader, Nelson Chamisa endorsed him while addressing thousands of party supporters during a rally at Vengere Stadium recently.
Other notable Zanu PF politicians who lost their seats are Terrence Mukupe who lost Harare East to Tendai Biti and Jaison Passade who lost Mt Pleasant to Samuel Banda. Mukupe is Chinamasa's deputy at the Ministry of Finance.politics