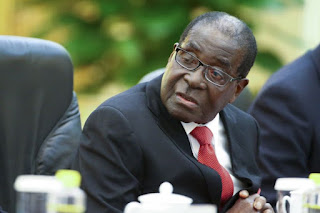 HARARE - Zimbabwe National Liberation War Veterans Association (ZNLWVA) national spokesperson, Douglas Mahiya has heaped the blame for the shooting of six demonstrators by soldiers in Harare on August 01 on former president Robert Mugabe.
Mahiya told journalists at a press conference at the Harare international Conference Centre a day after the deadly shootings that the involvement of Mugabe in today's politics was the cause of the violence.
"Mugabe doesn't deserve to be laid on the Heroes' Acre because of his previous and current activities in today's politics. He has done enough and we as war vets will not allow this madness; he has married himself to Nelson Chamisa and has lost track of cadreship," Mahiya said.
He said the youth were being used by political parties at the expense of the people's lives, adding that young people must refused to be used to stoke the flames of a civil war.
Tandiwe Ngulube, who was one of the panellists, echoed Mahiya's words, saying the continued involvement of Mugabe in politics was saddening and would mark the end of Chamisa's political career.
"War veterans see the hand of Mugabe hovering in today's politics and his cunning behaviour in the opposition party is still visible," she said.
Mugabe organised a press conference on the day before the harmonised elections, where he poured out his bitterness at Zanu PF for removing him from power and 'expelling me from a party I founded.'
He also made it clear that he was not going to vote for Zanu PF, a party that 'tormented me', saying the only choice that remained for him was Chamisa since the other notable opposition leaders like Joice Mujuru and Thokozani Khupe did not offer much.
Chamisa later held his own press conference saying he welcomed every vote, arguing it was not for candidates to choose voters, but for voters to choose candidates.
President Emmerson Mnangagwa and his Zanu PF party, however, went to town about the developments, saying Chamisa had entered into an unholy alliance with Mugabe and discredited himself in the process.politics