Home » »Unlabelled » ‘There will be no inauguration’

‘There will be no inauguration’ 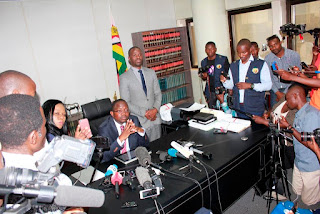 Advocate Mpofu addresses journalists during  a press conferance at his law chambers in Harare. Standing behind him is Chamisa's spokesperson, Dr Nkululeko Sibanda

HARARE - Advocate Thabani Mpofu on behalf of the MDC Alliance presidential candidate, Nelson Chamisa told journalist yesterday, August 08, said President Emmerson Mnangagwa will not be inaugurated before the finalisation of the opposition coalition's court challenge.
Speaking at a press conference in the capital, Mpofu said the opposition had filed their court application against Mnangagwa's 'fraudulent' victory.
He said they were still within the constitutional time frame needed to challenge the results of the presidential election in court, dismissing indications from government that the inauguration will be held on August 12.
"I am here representing Nelson Chamisa and we have filed our application against the presidential results and this is the evidence (waving a bunch of papers) which shows beyond any reasonable doubt that Chamisa won the elections.
"We cannot, however, put too much weight in our judicial system; it is just the procedure and we will follow it. Yes they have set the date for the inauguration, but it is the court process first then the inauguration later," Mpofu said.
He also spoke on intimidation that he and other people in the opposition were facing every day in their efforts to defend the vote.
"We will stand for the truth even in the prison cell and on the death bed. We have the evidence that they don't want to be known. That is why we are being arrested," Mpofu said.
Meanwhile the MDC Alliance principal and newly-elected MP for Harare East, Tendai Biti has been denied asylum in Zambia where he escaped on Wednesday fearing for his life.
His fate was not yet clear by the time of going to print, with many legal gurus saying international statutes on the rights of refugees and asylum seeker did not allow Zambia to send him back to Zimbabwe. At worst, it was argued, Zambia was expected to allow Biti to choose another country where he wanted to go, rather than hand him over to the same authorities persecuting him.
A video of Biti being roughed up by a mob at Chirundu border post circulated widely on social media, drawing condemnation from many people who felt the former Finance minister had done nothing wrong to deserve such kind of humiliation.
"We are being intimidated; we are being followed around and some are being raided at their places of aboard. We cannot report this to the police as they are the same authorities who are also behind our necks," Mpofu said.local
Share !