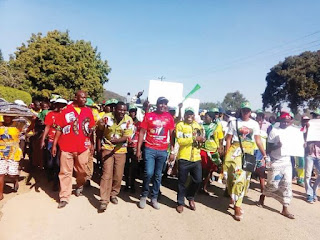 MPANDAWANA - Hundreds of Zanu PF youths together with their provincial leaders this week held a solidarity march around the growth point celebrating President Emmerson Mngangagwa's disputed presidential election victory.
It was the first celebration to be done in Mpandawana, with the youths saying many other celebratory marches will be done across the province soon after the inauguration of the President-elect.
They said they were not bothered by MDC Alliance leader, Nelson Chamisa's Constitutional Court application challenging Mnangagwa's victory, adding that they were confident they will win the case.
Zanu PF Masvingo provincial youth chairperson, Brian Munyoro said they decided to have the marches in celebration of the party and its presidential election candidate's victory.
"We have decided to have similar celebrations in all the districts around Masvingo province so that we can send a signal to the whole country that Zanu PF has won and the issue of going to the courts is null and void. We want to prove that we are the actual people who voted and we made our choices clear.
"We want to show those who are challenging our president's victory that here are the people who voted for him and we are going to do that as we march peacefully in our numbers," Munyoro said.
He said the youth were looking forward to the country moving forward smoothly and peacefully under the leadership of Mnangagwa.local