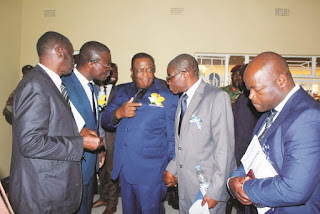 MASVINGO – The Zimbabwe Defence Forces (ZDF) on August 08 handed over a four lecture room block to the Reformed Church University (RCU) to mark the launch of its 2018 defence forces community assistance week.
The guest of honour at the handover ceremony, Vice President Constantino Chiwenga said the construction of the block was in fulfilment of ZDF's constitutional mandate of providing military aid to communities.
"The construction of this block is indeed a clear testimony of mutual co-operation as well as unity of purpose between ZDF and RCU. The new block is expected to improve the quality of education for all students who will have the opportunity to pass through this university," said Chiwenga.
He also said the ZDF was carrying out a number of similar projects around the country, adding that the gesture demonstrated the organisation's support and unquestionable commitment to programmes that advance the country's interests.
The Minister of Higher Education, Science and Technology Development, Professor Amon Murwira said the gesture was a fulfilment of the ministry's three main pillars.
"We have three main pillars in education namely good teachers, physical infrastructure and good programmes and we accept your gift since it is one of the pillars aimed at improving our country," said Murwira.
RCU chancellor, Rev Dr Rangarirai Rutoro echoed the same sentiments and thanked ZDF, saying the university appreciated the collective efforts of the church and the armed forces in furthering education development.
Speaking at the same event, ZDF commander, General Philip Valerio Sibanda said the organisation was ready to send artisans to assist where ever needed.
"You need to make sure that all the required resources and labour are available so that the artisans will not spend much time on a single project," said Sibanda.
Also present was Air Marshal Elson Moyo, Commander ZNA; Lt Gen Edzai Chimonyo, several Members of Parliament (MPS) and traditional leaders.education
Share !