ZVISHAVANE – The first local Heroes' Day commemorations without Robert Mugabe as President were held at Nhamodzenyika Heroes' Acre some eight kilometres from the town at Siboza growth point.
The official speech was read to the public by the District Administrator (DA) Shepherd Marweyi who was the guest of honour at the event which was attended by many other dignitaries including Zvishavane-Ngezi Member of Parliament (MP) Dumizweni Mahwite and his Zvishavane-Runde counterpart, Cuthbert Mpame.
Traditional leaders present included Chief Mafala, Chief Masenda, Chief Mazvihwa, Chief Mapanzure and Chief Wedza
Chief Masunda urged the crowd to respect the fallen sons and daughters as well as all the living people who sacrificed their energy, resources, time and lives for the liberation of the country from racist White minority rule.
He also encouraged Zimbabwe to respect whoever is going to be inaugurated as President in the few days to come.
On his part, Mpame told TellZim News that this year's Heroes Day commemorations were important for the ruling Zanu PF party as it was celebrating its victory in the July 30 harmonised elections.
"Today is a special day because we registered a thunderous victory in the July 30 elections. We are therefore not only celebrating heroes and heroines; we are also celebrating a great victory in the elections," said Mpame.
Peter Ngwenya, a collaborator during the 1970 armed war of liberation, said he always relived the heroic exploits of those who gave their lives for the independence of the country whenever Heroes' Day is marked.
"I had feared that the current political developments were going to lead to this year's celebrations being cancelled but I am now happy that we are here. Many people died for us to be free. It is good that many other people have come together around the country to celebrate the sacrifices made by those departed sons and daughters of this land," said Ngwenya.local 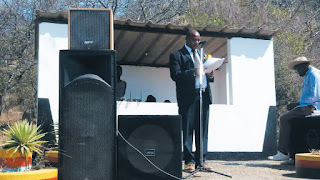