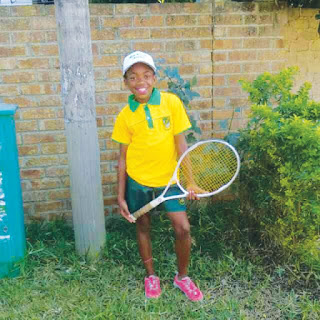 Masvingo's young tennis star, Ednah Mhango recently lifted the country's flag high in Namibia by winning a gold medal at the Confederation of School Sport Associations of Southern Africa (Cossasa) ball games.
The 11-year-old Helen McGhie grade 6 pupil cruised to the Under 13 singles final to beat one of the finest players from hosts Namibia.
Speaking to TellZim news, Ednah's father, Exile Mhango said he was humbled by the performance of his child whom he said had always performed beyond expectations to claim over 15 accolades in the early stages of her career.
"To date, she has won many medals and accolades. She started playing tennis while in grade 3 and now being in grade 6, I think she has done me proud. As the father, I am pleased by my daughter's performance," said Mhango.
The tennis star, who was born on April 10, 2007, started playing when she was doing grade 3 and has so far won 17 gold medals, two shields and one trophy. This has made her one of the most successful young tennis players in the country.
The Cossasa games, held from August 20 - 25, attracted national select teams from all countries in the Southern Africa Development Community (Sadc).
Athletes competed in eight ball games namely football, basketball, netball, hockey, volleyball, cricket, tennis and rugby.sport
Share !