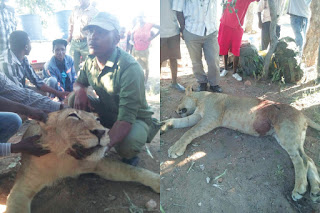 CHIPINGE - Conflicts between wildlife and humans seem to be far from over in the district, with many clashes being occasionally reported.
In the past three years, there have been reports of wildlife 'trespassing' into communities and causing havoc on people's property.
In June 2015, a lion killed five cattle at Maronga near Chibuwe. In March 2016, three lions were poisoned in Chibuwe by disgruntled villagers who accused the cats of killing their livestock.
In response to the incident, Environment and Climate Change, Oppah Muchinguri-Kashiri went to Chibuwe to try and address the issue of human-wildlife conflict.
In January 2017, it was recorded that 10 cattle were killed by lions in Ngaone communal lands. In May 2017, a three-year old lion was killed in Bangwe after it had killed a cow and some goats.
In June this year, a man was fortunate to survive a buffalo attack in Chibuwe. A few weeks ago, a 35 year-old woman was gored to death by a stray buffalo while fetching firewood in the bush in Chibuwe.
Most of these animals are said to be straying from Save Valley Conservancy. Most of the stray animals get killed under Problem Animal Control (PAC) by a team from the Department of National Parks and Wildlife Management stationed at Chipanganyi, Chipinge Safari Area.
According to World Wide Fund for Nature (WWF), human-wildlife conflict is 'any interaction between humans and wildlife that results in negative impacts on human social, economic or cultural life, on the conservation of wildlife populations, or on the environment'.
Reasons that trigger the conflict include population explosion where people end up clearing new land for building homes and crop farming. Massive land clearance destroys land that might have been initially reserved for grazing or for animal habitat.
For fuel and timber, migrants harvest wood from available forests or woodlots leading to animals like hyenas, lions and leopards exposed or without natural cover. Also, climate change has led the Valley of Chipinge experiencing severe droughts that has seen villagers selling a head of cattle for as little as US$50 in 2016. Such droughts also reduce the availability of animal food, so wildlife end up seeking alternative food sources like humans, crops and livestock outside of protected areas.
Last year, wheat farmers in Middle Save petitioned authorities to eliminate quellia birds which had caused havoc in wheat fields that are adjacent sugar to cane grower, Rating Investments (formerly ARDA Middle Save). Loss of investment tempts farmers to use lethal means of control such pests.
For humans in Chipinge and other communities that surround wildlife reserves, the conflict seems to be permanent since wildlife authorities in Southern Africa have no clear policies on compensation for the people's loss to wildlife attacks.
Share !