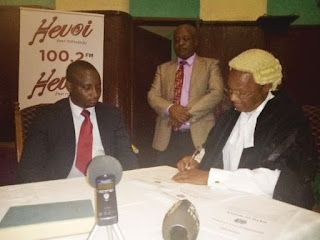 The mayoral and deputy mayoral elections in council chambers on Wednesday evening produced shocking results, with some of the MDC Alliance councillors voting for a Zanu PF councillor to be deputy mayor.

This was said to be in complete defiance of a party directive which had reportedly wanted Ward 1 councillor Selina Maridza to deputise Godfrey Kurauone of Ward 4.

In a shocking turn of events however, Maridza ganged up with three other MDC Alliance councillors and the three Zanu PF councillors to vote for MDC Alliance's Collen Maboke (Ward 2) as mayor and Zanu PF's Wellington Mahwende as deputy mayor.

This threw into complete quandary the decisions of the opposition coalition with regards to leadership of the city council for the next five years.

After the results went public, angry MDC Alliance supporters thronged the Civic Centre baying for the blood of the councillors suspected of throwing their lots with Zanu PF.

In the chambers, there was some quarrelling over the voting method, with Kurauone moving a motion for a candidate to be first nominated and then have them seconded, while Town Clerk Adolf Gusha suggested a secret ballot which was then thrown out of the window.

The plan was to nominate Kurauone and Maridza and let them sail through unopposed, but Mahwende pulled a shocker by nominating Maboke out of the blue.

Maboke then accepted the offer, much to the shock of Kurauone who had expected an easy sail-through. Kurauone was to be shocked even more when results came out showing Maboke had won by seven votes to his three, confirming his worst fear that Zanu PF's three councillors had struck a deal with four MDC Alliance councillors rabidly opposed to him.

The whole conspiracy came to light when councillors voted for the deputy mayor, with Kurauoke –  despite having already been betrayed – sticking to the original script of nominating Maridza as deputy mayor, with Mberikunashe seconding.

Zanu PF's Ward 8 councillor Against Chiteme then nominated Mahwende who accepted and won the vote, with Maridza being suspected of having voted against herself.

Kurauone, Mberikunashe and Musekiwa were reportedly kept completely in the dark and were misled into believing that the original script would succeed.

"How can they do this? We campaigned for our party and the people we voted for are supping with the enemy," screamed one visibly angry supporter.

Municipal police officers had a torrid task trying to restrain the angry mob from storming the council chambers.

"It is better to be arrested for beating up all of these sell-outs because they seem not to understand our struggle. We are fighting Zanu PF and our councillors are busy voting for them. We will demand an emergency provincial meeting to have all the sell-out councillors recalled. These people have no principles at all and they have given Zanu PF space to infiltrate," said another irate supporter.

MDC Alliance provincial chairperson James Gumbi could not be reached for comment by the time of going to print.top news