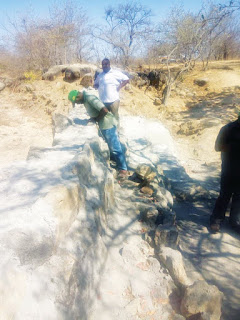 Huruva stands at one of his projects

CHIVI – Newly-elected Chivi Ward 6 councillor, Godfrey Huruva Mukungunugwa is forging ahead with the village electrification programme he initiated long before he became councillor.
Mukungunugwa, who has since been elected Chivi Rural District Council (RDC) chairperson, has been using his own resources to install solar systems at schools in his ward.
One beneficiary of the goodwill is Maramba Primary School where teacher's houses, the grade seven classroom block and other facilities were recently solar-powered.
Mukungunugwa has also purchased solar systems for the district councillors, such traditional leaders as Headman Madyangove and some village heads. The Mhandamabwe Police base has also been provided with similar systems as a way of improving lighting during the night.
"This is a programme I would continue working on so that all people can eventually have power in their households. We can't wait for Zesa when we have got abundant sunlight in the district. Solar energy is cheap and renewable so people must have modern lighting during the night and they must also be able to charge their phones without hassles," said Mukungunugwa.
To spread the service to more ordinary people, the youthful councillor has introduced a 'pay as you go' facility whereby villagers can have solar systems installed at their homesteads at a small deposit. They can then pay the rest of the costs at monthly installments of as little as seven dollars.
Besides the solar projects, Mukungunugwa has funded the construction of two new classroom blocks at Maramba Primary School as part of his many other efforts to improve infrastructure at public facilities so as to retain critical skills in the district.local
Share !