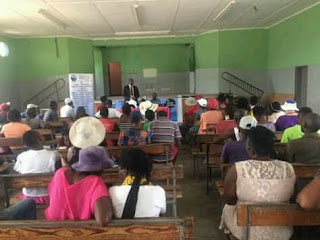 MDC Alliance Masvingo Urban Member of Parliament (MP) Jacob Nyokanhete came back from the official opening of the 9th Parliament of Zimbabwe in Harare and went into communities where he interacted with residents to get a better appreciation of their challenges.

The youthful legislator, who is the only opposition MP from the province, attended a stakeholders meeting organised by the Masvingo Residents and Ratepayers Alliance (Murra) at Rujeko Community Hall on Thursday.

Issues raised at the meeting include the long-talked-about need for a secondary school in the area, which currently has only two primary schools for the tens of thousands of people who live there.

At the meeting, Nyokanhete pledged his support for whatever the people desired from the authorities, saying it was depressing that children in an urban set-up still had no easy access to secondary education.

"This is a big community by our standards and it is not acceptable that the people who put us into positions of authority, the people who pay rates and taxes still lack such basic services as secondary schools. Seeing children walking from as far as Rujeko B to Ndarama and Mucheke High schools is unacceptable. How then are we different from those in rural areas?" said Nyokanhete.

Ward 7 councillor, Richard Musekiwa also said he will continue to lobby for the implementation of pending projects that have a bearing on the people of Rujeko.

"There are now solid plans for Rujeko D and the stands are being designed. That is a good project but we need to move with speed and build the footbridge and a secondary school. Those projects must take precedence and I will work for that in council," said Musekiwa.

A similar meeting was also held the following day, Friday, September 21, at Francis Aphiri Primary School where Nyokanhete said he was awake to the community's age-old problems that include the absence of a secondary school close by, insufficient water supplies and the problematic dumpsite.

At the school, Nyokanhete listened to tales of inadequate sitting space leading to the so-called 'hot-sitting' practice.

"We need to work together with council to address these things going forward. The people need a new clinic with a maternity wing. Our roads are terrible and they need urgent quality fixing, street lighting has been long neglected. We need to urgently deliver on these and we do not want to keep on talking with no action.

"I will continue engaging the people of Masvingo Urban, and I will represent their interests in parliament and at all levels. We appreciate the work that Murra is doing in giving us a platform to talk to the communities," said Nyokanhete.

Ward 3 councillor, Tarusenga Vhembo said problems in the area required a committed council to solve, pledging to work hard to raise those issues in council.local