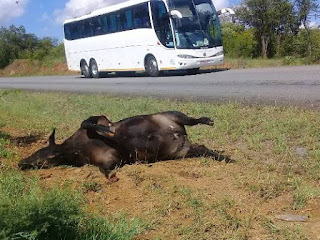 ZVISHAVANE - Zvishavane Town Council in collaboration with the Zvishavane traffic police are planning to hire a pound master to take control of stray animals in town as a drastic measure to reduce road accidents.
Stray animals are being blamed for contributing to some of the road traffic accidents happening in the mining town.
Speaking at a traffic consultative meeting at Madeira last week, Zimbabwe Republic Police (ZRP) Zvishavane traffic liaison officer, Assistant Inspector Brighton Nzima said almost 50 percent of all accidents recorded since January were caused by stray animals.
Nzima said the solution could come by hiring a poundmaster – a person who will be responsible for taking care of stray animals until their owners collect them upon paying a fine.
"We have only one problem as a department; those stray animals that are contributing to almost 50 percent of the road accidents in our town. We want to introduce a poundmaster who will take the livestock and let the owners pay fines before collecting them," said Nzima.
Zvishavane traffic chief security officer, Francis Machaya echoed Nzima's words saying the services of a poundmaster were critical to the reduction of road traffic accidents in the town.
"We once had a poundmaster who was paid on commission and we had a kraal where the livestock were kept but the place has since been taken away. We don't have a site or a kraal as of yet so we will speak with the management of Shabani Mine so that we can share their kraal," said Machaya.local
Share !