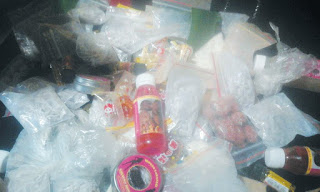 ZVISHAVANE - There is a new craze for Indian aphrodisiacs and other related herbs commonly known as Indian sweets in the town, with one enterprising merchant of the products saying she is making a killing out of the rush.
An Indian woman who has adopted the name Tariro for use in business circles, said her business, which she started in November 2017, has gained popularity in the town and in the neighbouring Mberengwa district, boasting more than 100 regular customers.
"When I started this business last year, it was a bit difficult since customers had no knowledge of these wonderful things but as for now, several men and women are aware of the products and the demand is going up," Tariro said.
She said her customers were from a demographic cross section; men and women, married and unmarried, younger and older.
She said the rising popularity of her merchandise had made her economically independent as she no longer relied on her husband's income for all things she needs.
"This business made me independent. I no longer ask money for my basic needs as I get an average of $20 profit on a daily basis from the sales.
Her products include Gogo gigi manzi, Kuze kuze imbawala, Sexy lip balm, Rocky coffee for men, Sour prume, Love drop, black seed.
"My products are natural with no side effects. Each sweet has its own special use for example Gogo gigi is a sweet used by women for vagina tightening, Black seed is used for cleansing the womb, Chiname is used by women to manipulate men's movement and behaviour, while Rocky coffee for men maximises men's performance in bed," she said.
A widowed woman who has been a consumer of Indian sweets said the products helped her a lot and had given her hope.
"I am 36-years-old but since I started using these sweets, I felt like I am 20 years younger. I have not experienced any side effects so these sweets are really good for me," she said.local
Share !