…Zec caught with hands in cookie jar in Makoni North 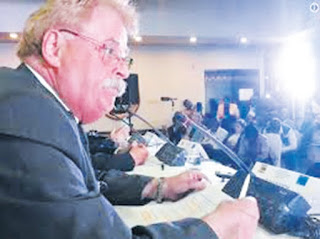 The European Union Election Observer Mission (EU EOM) has largely backed the opposition MDC Alliance's claims that the July 30 harmonised elections were not free, fair, transparent and credible.
In its 67-page final report released in Harare on October 10, EU EOM says many aspects of the elections failed to meet internationally-accepted standards.
The report notes such issues as the non-verifiability of some released results, gross errors, lack of transparency on the part of the Zimbabwe Electoral Commission (ZEC) as well as its perceived bias, heavily partisan State-controlled media and misuse of State resources as some of the factors that besmirched the elections.
"Notably, major shortcomings in the pre-election environment impacted on the free expression of the will of electors, state resources were misused in favour of the incumbent and coverage by state media was heavily biased in favour of the ruling party. Further, the electoral commission lacked full independence and appeared to not always act in an impartial manner. The final results as announced by the Electoral Commission contained numerous errors and lacked adequate traceability, transparency and verifiability," part of the report reads.
The report highlights the use of 'excessive force' leading to the shooting of demonstrators by soldiers on August 01 as a major damper on the post-election period.
"However, while political rights were largely respected, there were concerns regarding the environment for the polls and the failure to achieve a level playing field. Observers widely reported on efforts to undermine the free expression of the will of electors, through inducements, intimidation and coercion against prospective voters to try to ensure a vote in favour of the ruling party.
"Such practices also included direct threats of violence, pressure on people to attend rallies, partisan actions by traditional leaders, collection of voter registration slips and other measures to undermine confidence in the secrecy of the vote, manipulation of food aid and agricultural programmes and other misuses of state resources," the report further reads.
Most damning was probably the Makoni North case where EU EOM observer reportedly found Zec officials completing V11 forms two days after the elections, and in the absence of parties' polling agents.
"The EU EOM observed ZEC officers in Makoni North completing V11 forms two days after Election Day, even though polling staff and party agents were not present. They claimed this was due to the earlier lack of V11 forms," the report reads.
Zanu PF politburo member Munyaradzi Mangwana, however, dismissed the report, and was reported in State-controlled media as saying the party will not be guided by standards it knows nothing about, but by Sadc and AU standards that he said had already endorsed the elections.politics