Junior MP reaches out to disadvantaged girls in Chiredzi West 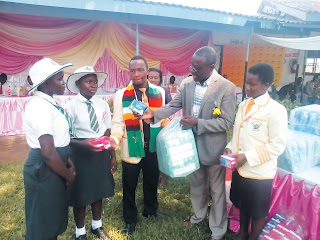 CHIREDZI - Chiredzi West Junior Member of Parliament (MP), Takudzwa Clever, together with pupils from South Eastern College (SEC) have donated 316 sanitary pads to disadvantaged children in several local schools.
At an event held at Ratidzo Primary School, Childline and diversified retail and hospitality group Pote Holdings supported the Junior MP’s efforts by donating 316 more sanitary pads.
The event was graced by Chiredzi West Member of Parliament (MP) Farai Musikavanhu.
Some SEC pupils, with the active encouragement of Clever’s mentor and teacher Lena Siwela, managed to save money from their meagre resources which they then used to buy the sanitary wear for distribution at 16 primary and secondary schools.
In his speech, Clever said the girl child and women bore the severest effects of poverty, lack of health care and proper education.
“We are here today to observe and give respect to the girl child who is the most vulnerable group in society. Girls and women often bear the severest consequences of poverty, lack of health and education, climate change and other inequality.
“Many people in the educational sector say educating girls is the right and smart thing to do, taking care of a girl child from a tender age is a benefit for future generations. It is in deep pain that the girl child is the word bright but still struggling to see the light,” said Clever.
He said the girl child should be given good care as she endures them most pain and enjoys the least benefits.
“Girls who will become mothers endure all the pain in the biological production processes yet they enjoy less benefits thereof,” Clever said.
In his own address, Musikavanhu applauded Clever’s initiative of mobilising resources for disadvantaged female colleagues in the constituency.
“Interventions like this one, facilitated by our Junior MP with the help of his teachers and colleagues, are very important. Some children are failing to attend lessons just because of sanitary issues. I want to applaud that,” said Musikavanhu.