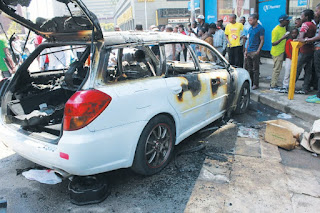 A Subaru belonging to the shooter was burnt by the mob after the shooting incident. Pic by Shingirai Vambe

HARARE - It has been over two weeks now with vendors having to play cat and mouse games against the police in the central business district (CBD) of the capital, with several incidences of retaliatory attacks against alleged police heavy handedness.
Videos of agitated vendors throwing stones at police vehicles, and of police smashing a vehicle windscreen among many other acts of brutality, have been circulating on social media.
Teargas canisters thrown randomly, thereby affecting other innocent street users have also been a regular dose for vendors as well as other members of the public.
In some few recorded incidents, staff from the Zimbabwe Tourism Authority (ZTA) were asked to lie down at a restaurant near Karigamombe Centre, and were then thoroughly beaten by the members of the police.
On Friday evening last week, a High court of Zimbabwe staff member was caught in the cross fire, and was beaten and kicked by the members of the police force.
Various informal traders' groupings including the Samuel Mangoma-led Viset condemned the relentless war against vendors, saying it was wrong for government to blame vendors for the cholera outbreak when it had not solved glaring service delivery shortcomings especially in such areas as the provision of safe water for domestic use and sewer reticulation.
Meanwhile, a Harare man was shot dead reportedly at point blank range on Wednesday, October 10 after a dispute which arose after a motorist had refused to pay for a parking bay to the marshals who control the area at the corner of Angwa Street and Kwame Nkrumah Avenue.
The motorist's reason for refusing to pay was that the marshals were not authorised to collect parking fees, arguing that he would pay only to City of Harare employees.
The name of the dead man was said to be Grashem Wakapiwa, a Kuwadzana 2 resident, who reportedly has now left behind a five-month pregnant wife.
Before the shooting incident, a group of people had accosted the motorist demanding that he pay the parking fee but the motorist began to run away, with several people in hot pursuit.
Wakapiwa reportedly joined the chase and was shot in the head, with another non-fatal shot hitting a woman who was close by.
The crowd then turned onto the gunman's parked Subaru car which reportedly had a stash of Zanu PF regalia on board, and set it alight.
"The Zimbabwe Republic Police would like to confirm the death of a 40 year old man following a shooting incident that occurred at the corner of Angwa Street and Kwame Nkrumah near QV Pharmacy, Harare today, 10 October 2018 in the morning," read part of a police press statement issued later in the day.
The statement also reads that the 24-year-old shooter and 'the four men who had incited the violence' were quickly arrested.local
Share !