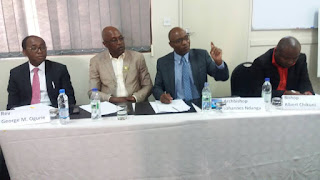 Ndanga (3rd from left) stresses a point at the event

More than 40 000 couples drawn from all walks of life are expected to attend the Peace Family Festival organised by the Family Federation for World Peace and Unification (FFWPU) to be held at the National Sports Stadium in Harare on November 17.
FFWPUZ Zimbabwe chapter chairperson, Archbishop Johannes Ndanga told journalists and other people who attended the media sensitisation workshop held in Harare as a build up to the event that they were expecting a huge turnout as the registrations had surpassed the target of 40k couples.
Ndanga said the festival, which is running under the motto ‘Strong and Healthy Families Make a Healthy and Prosperous Nation’, was a rededication exercise where couples will be blessed to create peaceful families.
“The purpose of this festival is to heal the wounds of the past and support the Zimbabwean government’s endeavours for peace and reconciliation.
“We are expecting to host more than 40 000 couples. There is an ongoing registration exercise going on around the country and the response is overwhelming. We are inviting people from all walks of life to attend the festival and be blessed as we seek to heal our nation,” said Ndanga.
He also said the media critical in fostering peace and reconciliation through its in influence on public opinion.
He also said FFWPUZ will soon launch a program to award journalists who will report positively towards peace and reconciliation.
Speaking at the same event, the deputy minister in the Ministry of Information Publicity and Broadcasting Services Energy Mutodi applauded FFWPU for organising the workshop as well as the festival saying it will go a long way in promoting the governments’ efforts to engender a peace in the country.
“At a time when business people and nations are engulfed in perceived disunity, we are reminded that we are greater than our differences and we should therefore take a step in unison towards peace,” said Mutodi