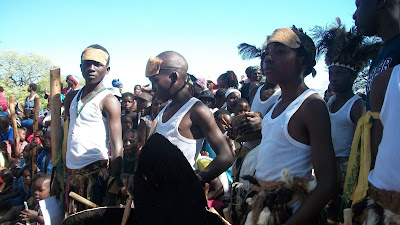 Stephen Ephraem
In a case resembling the Biblical David and Goliath account, underdogs Checheche Primary School ended Gaza Primary School’s five-year dominance as district traditional dance champions during competitions held at St Peters’ Primary School.
Prior to this year’s competitions, Checheche Primary School had not been known for making it to the district level.
At the event, teams danced the Muchongoyo set piece plus one other dance of their own choice, with the combination of marks obtained in the two categories determining a team’s overall mark.
In the Muchongoyo category Gaza, Madhuku, Muzite, Maronga and Checheche were the strongest but in the own choice category, St Albertina, Checheche and Gaza outclassed others.
It was, however, Checheche who won the best overall prize after a sterling performance even in the own choice category where they danced to the Chokoto beat. Maronga, Madhuku, Gaza and Muzite took second, third, fourth and fifth positions respectively.
Speaking at the occasion, National Primary School Heads (NAPH) district chairperson, Mr. Chipongo thanked all teams for according pupils a chance to showcase their talents.
Chipinge District Schools Inspector (DSI) Richard Gabaza urged the winning teams to bring the national trophy to Chipinge.
“Checheche is now representing Chipinge district so let us support the team with all the time and resources that we can spare so that they can make us proud at the next level.
“The Muchongoyo dance set piece emanates from Chipinge so you would be doing us great honour if you bring the trophy where the dance belongs,” he said.