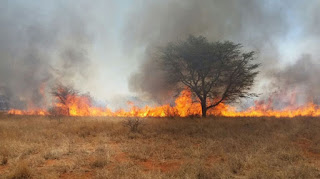 GUTU - Chittas Driving School owner Sam Nyanyiwa mysteriously died last week at his stand in Chomfuli location close to Gutu garage whilst he was burning rubbish.
Sources said that as he was cleaning the yard he decided to burn the rubbish and the fire went out of control.
He then tried to contain the fire but was overwhelmed by the heat and smoke which suffocated him and he died.
The driving school instructor Enerst Mahachi confirmed the incident saying he was the first person to be at the scene.
“I was at the office when I received a call from people who were at Gutu Mission Hospital saying they were trying to call him so that he could come and pick them up but he was not answering his mobile.
“I went there and took them. After that I went for a 30 minute lesson in Chomufli location and came back but my boss had not come. I became worried and tried his phone but there was no answer. I then decided to go check at his house that is when I found him lying dead on the ground in the backyard,” said Mahachi.
Nyanyiwa is survived by his wife and three children.