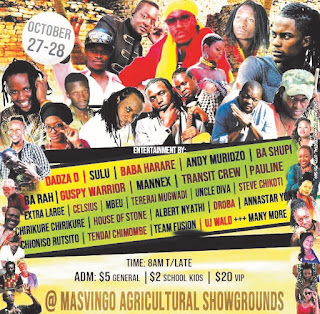 Part of the poster that circulated on social networks

Artists have cried foul while fans have lamented losing money after a disorganised function that was supposed to take place at Masvingo Show Grounds in Masvingo from October 27-28, 2018 proved to be a farce.
The show should have featured over 100 Zimbabwean artists including big names like Albert Nyathi, Chirikure Chirikure, Sulumani Chimbetu, Baba Harare and local entertainer Baba Rah.
Eugene Majuru, who is said to be the promoter based in the United Kingdom, was allegedly organising through phone calls and social media.
Trust Kwabatsha, an artist agent and coordinator from Bulawayo said he was ordered to bring three groups of artists, and he brought 25 artists in total, translating to massive losses.
“I was affected by this mismanagement very much as l had brought 25 artists from Bulawayo and endured heavy losses,” he said.
Artists who travelled from Harare waited hopelessly for the event which was supposed to begin at 08:00hrs. They got to the venue to see the stage not set and equipment lying around on the grass.
When contacted for comment, Majuru blamed sponsors for ‘letting us down the 11th hour.’
“We managed to put up something even though we were let down by some corporates that we had partnered. We had fuel problems and we had to hire the sound system and stage since we could not manage to get funds from our partners who had promised to sponsor.
“The festival began late and the police banned the show saying we needed to apply for a clearance first. We had a challenge with accommodation for artists so we secured rooms somewhere else for some of them since they came in their numbers,” said Majuru.
TellZim News saw a letter which was written by someone who presented himself as the finance officer of the National Arts Council of Zimbabwe (NACZ) and addressed to the operations and events manager of Royal Unlimited Expressions Trust, M. R. Hunzvi giving permission to stage the festival stating that it was bound to raise the profile of arts and culture in Masvingo.
The letter’s authenticity was questioned since it was said to have been received from a Zimbabwe Tourism Authority (ZTA) representative without the knowledge of NACZ Masvingo regional manager, Helen Mudefi.
Mudefi slammed the organizers of the show, calling them dubious, and she advised artists to sign contracts two weeks before the day of the show.
“Artists should consult NACZ to avoid bogus promoters. They should be professional and sign contract forms two weeks before the show. Venue owners need to comply by registering their venues and promoters must comply with the rules and regulations for organising festivals and not tarnish the arts sector,” said Mudefi.