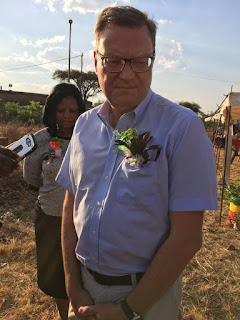 Hutter speaks to the media after the event

GWERU - Germany Development Cooperation (GIZ) and Gweru City Council (GCC) have unblocked and opened up the kopje reservoirs at a cost of US$60 000 to end a 10-year problem of water failing to smoothly flow to the tanks.
Speaking at the re-commissioning of the tanks in Gweru, GIZ project manager Stephen Lidsba said the partners had seen that part of the water shortages in the city could be traced to the problems at the reservoirs.
“We spent around $60 000 to get  a team from Germany who spent time with Robson Manase (director of engineering services in council) digging around and looking at where the pipes were in order to solve the problem of water not getting into the tanks.
“So it was a two-month exercise and we discovered that the problem was just a valve, one valve to get the water back into the tanks. So we opened the valve and now here we are. We are now using the tanks again,” said Lidsba.
German ambassador to Zimbabwe, Thorsten Hutter praised the close relationship between the city and the people of Germany, encouraging the twinning of cities between the two countries.
“The twining of cities for partnership and development is a cultural cooperation and yes it happened between the City of Masvingo and one of the German cities. It sought to build relationships between Germany and Zimbabwe but as for now, the link between the Gweru council and GIZ is strong and yielding results,” said Hutter.
He was referring to the twinning agreement between Masvingo and Kernen, a relationship which has brought enormous economic benefits especially to the people of Masvingo.
“We had a meeting with the engineer and council staff and council highlighted some of the major challenges being faced. Since GIZ is in a partnership with council, some of those problems will be solved,” Hutter said.
He pledged Germany’s continued support for the developmental needs of the people of Zimbabwe.