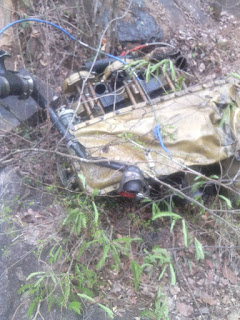 Part of the wrecked aircraft

At least three people died at around 07:00 hrs this morning when an aircraft they were traveling in crushed in the Chamanjerenje Hills Village 5 in Tokwane Ngundu.
It was not yet clear by the time of writing the direction that the aircraft was traveling towards or from, but eyewitnesses said at least three white males died on the spot.
Though Masvingo provincial police were not immediately available to comment, sources said police, civil aviation, and army officials in Renco attended the scene.
No registration details of the plane could be deciphered on the wreck, but unconfirmed reports say it belongs to the Chiredzi-based Hippo Valley sugar estates.
By the time of writing, graphic pictures of broken bodies mingled with the wreckage were doing the rounds on social media.