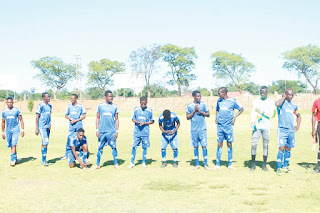 After failing to beat Masvingo Pirates in the first leg match, Bikita Minerals coach John Phiri rued Sunday's one-all draw at Mucheke Stadium as a missed opportunity to turn a new leaf in his record against the Masvingo giants.
Dzinochekwa Baba played second fiddle to John Phiri's enterprising Bikita Minerals who dominated the larger part of the game after Michael Tapera's 37 minute red card.
The Bikita head coach acknowledged the good show his players put on but said they were not confident enough to attack effectively.
"We could have easily won the match, we failed to make our dominance count. We couldn't bury chances but as we all know 10 men are not easy to defeat. However we played a good game," said Phiri.
Pirates initially took the lead 10 minutes into the game through a Michael Tapera cracker from an indirect shot in the Bikita 18 yard box.
However, all hell broke loose 27 minutes later when the goal scorer was sent off for a second bookable offense on a Bikita Minerals player leaving the lithium miners with a one man numerical advantage.
Bikita then jumped on to the driving seat to dominate the entire part of the game, mounting pressure on the hosts who have managed to register three draws from their last three encounters.
The visitors kept knocking on the door of the visitors until their efforts were rewarded on 53 minutes as Barnabas Mutuche long range effort found the back of the net with Pirates young goalie, Taurai Madziise, doing nothing to stop the shot.
The numerically hand-capped Pirates regrouped and remained solid with the likes of veteran defender Andrew Tazvivinga and Caleb Masocha commanding the ship from the heart of defense.
Commenting on his team's performance, Pirates head coach, Billiat Muchenje applauded his team for remaining focused throughout the game.
"It was a tough game playing with one of our top strikers sent off but the guys regrouped and we managed to get a point but overal, my boys were in full form," said Muchenje.
The game was curtain raised by Yeukai Elders FC who won 5-4 against Bikita Elders who also put up a superb performance.
In other matches played last weekend, log leaders Manica Diamonds continued their record unbeaten run as they drew nil all against Green Fuel while second-placed Tenax FC won 2-1 against relegation-threatened Masvingo United.
Share !