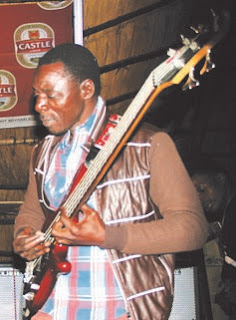 King of Sungura Alick Macheso has praised one of his dancers whom he introduced to the crowd as Albert saying he was a talented boy from Chiredzi.
Macheso was in the city on Saturday last week for a show at Caravan Park.
The crowd cheered the young man, Albert Mariya, as he showed his dancing prowess to the delight of his boss who kept on praising him.
Mariya is one of the two Orchestra Mberikwazvo band members with roots in the province, the other one being Devine Muzenda from Gutu. Another band member, Jabulani Chimuti is from Zvishavane in the neighbouring Midlands province.
Macheso gave a spirited performance and showed his passion from the time he got onto the stage soon after midnight right until dawn.
As has become his norm, Macheso chanted praises for his loyal fans in the crowd including local medical practitioner, Dr Kudzai Masinire. Baba Sharo, as Macheso is affectionately known these days, also thanked Panhimbe Crew, a vibrant local Afro-Fusion outfit, for warming the stage for him.
Orchestra Mberikwazvo manager, Tich Makahamadze later told TellZim News that he was happy with the attendance, thanking Panhimbe Crew for an impressive performance.
“I would like to thank fans who came in their number to grace our show despite the chilly weather. We promise to come back to Masvingo soon and we always want to give the best to our fans,” said Makahamadze.