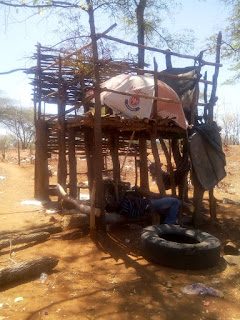 Chauke's deserted base from where he plied his illegal drug trade

MWENEZI - A daring Rutenga drug dealer, Amos Chauke also known as “Chibaba” and notorious for doing his business in broad daylight some few metres from the Mwenezi Magistrates’ Court, has finally been arrested.
Chauke was arrested while in possession of 500 grams and 24 twist of dagga.
He appeared before magistrate Honest Musiiwa last Thursday and denied the charges of unlawful dealing in dangerous drugs.
Chauke told the court detectives were among this main clients.
He was nonetheless convicted after full trial and sentenced to 12 months behind bars, two of which were conditionally set aside, leaving him to serve an effective 10 months imprisonment.
Testifying in court during the trial, Detective Shumba said the police now considered Chauke a security threat.
“We have been receiving complaints from several parents who said their minor children were now uncontrollable while others were becoming insane because of drugs supplied by Chauke. We launched investigations and following a tip off, we managed to catch Chauke supplying cannabis to his clients’ right at his base between this Magistrates’ Court and Chikombedzi Road,” said Shumba.
The State, led by Willard Chasi, convinced the court that on November 12 at around 15:00hrs, detectives found Chauke in possession of 500 grams and 24 twist of dagga, while some of his four clients were busy smoking another twist.
Chauke’s trial was the centre of attention as several top security officials within the district, concerned residents and some of Chauke’s known clients as well as his suspected dagga agents thronged the court to hear the case.