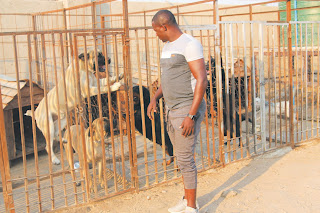 Professional boxer and former World Boxing Council (WBC) welterweight champion, Charles Manyuchi has sweet news for the district of Chipinge and surrounding areas.
Manyuchi, who runs a sports academy in Chivhu where he was allocated 3.5 hectares of land by Chikomba Rural District Council (RDC), told TellZim News that he was scouting for talent in Chipinge.
The boxer, who is rated the 35th best boxer in the world, was in Chipinge on a look and learn tour of Magistics Gangara Farm owned by Prosper Chibaya at Clearwater about 17km north-east of Chipinge town.
“The Charles Manyuchi Sports Academy in Chivhu is well-fenced and has administrative offices that are fully operational. We are now looking at how we can now expand to Chipinge and help children here discover their boxing abilities,” said Manyuchi.
The academy, which was officially opened by former Minister of State for Industry and Commerce Mike Bimha, has been praised for giving disadvantaged boxers a chance to shine while unveiling raw talent where it exists.
“Our place in Chivhu is open to any talented sport person of any age and it caters for soccer, volleyball, netball and boxing disciplines. The academy focuses much on the under-privileged and people from marginalised societies. Chipinge is my first choice out of Chivhu since my business partner has a farm here,” said Manyuchi.
The academy has hosted three boxing tournaments and the latest was held in August this year against some selected boxers from Zambia.
According to the boxing ace, no one from the Charles Manyuchi Sports Academy has ever lost.
“All the boxers that we fielded have won their fights. We have 3 female boxers who are doing well. We put value on our sports persons by giving them a good image in form of branded kits. We also give them decent pay-outs,” Manyuchi said.
Sports persons under Charles Manyuchi Sports Academy go in camp for a month before matches.
“Our sport person board meets in Borrowdale whenever we are to hold matches. We do this in order to give them enough attention so they enter competition fit and ready for the matches,” he said.
Manyuchi was born in Bulawayo and grew up in Mutoko where he attended school at Chifamba High in Mudzi.
During his amateur boxing career, Manyuchi joined boxing stables between 2006 and 2010 in sugar estate Triangle and later moved to Masvingo.
He was signed for professional boxing by Oriental Quarries Boxing Promotion of Zambia in 2012 when he went to the neighbouring for a boxing tournament.
Manyuchi breeds dogs for sale as part of his income-generating projects at his 100 hectare farm in Chivhu that he was allocated by the government of Zimbabwe.