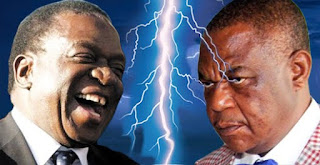 …as ED Pfee 2023 campaign begins
Upenyu Chaota
Barely four months after Zanu PF won the disputed July 30 harmonised polls by a wafer-thin margin, fresh fissures have emerged as the party now looks forward to 2023, with the Provincial Coordinating Committee (PCC) meeting here last Sunday resolving to endorse the candidature of President Emmerson Mnangagwa.
The mover has been interpreted as a calculated move to frustrate Vice President Constantino Chiwenga who is strongly believed to be highly ambitious and gunning for the top job.
The PCC met to carry their resolutions to the party’s annual National People’s Conference billed for December in Esigodini, Matebelaland South.
Over the years, Masvingo has been seen as the ground that shapes the politics in Zanu PF and this move means the restive province has already stirred the hornet’s nest.
It was made clear at the PCC that the province will not tolerate anyone who will try to derail Mnangagwa’s run for a second term of office in 2023 regardless of his current performance.
The move has since thrown the revolutionary party into yet another campaign mode a few months after the Constitutional Court ruled that Mnangagwa was the legitimate winner of the July 30 harmonised election.
At the PCC, party big wigs took turns to chant ‘2023 ED Pfee’ slogan with politburo member Josaya Hungwe telling the crowd that Mnangagwa himself said it was Masvingo that rescued him from potential trouble in the July 30 elections.
“The President himself was full of joy when he grabbed my hand. I could see he was happy and he told me that it was Masvingo which rescued him from potential trouble in the just ended election. Let us continue to rally behind him in 2023,” said Hungwe.
Zanu PF provincial chairperson and Minister of State for Masvingo Provincial Affairs, Ezra Chadzamira said the party and national constitutions were clear that a President could serve two terms maximum.
“We hear a lot of reports that there are people who are working to destabilise the party and we are watching you closely. As Masvingo, we say that must stop and we want to make it clear that President Mnangagwa is our candidate for 2023.
“We will not tolerate anyone who tries to derail our progress. This is our resolution as a province and we have our party and national constitutions to support us. A President should serve two terms at most and President Mnangagwa will be our candidate in 2023.
“There are people who will come and tell you sweet nothings but you should never listen to them. Our resolution is simple and we will back it,” said Chadzamira who took some punches for the incumbent at the heat of Zanu PF factional fights between Lacoste and G40.
Another party bigwig, Lovemore Matuke said the party should remain united under Mnangagwa.
“President Mnangagwa is a man with a vision and we have to support that vision. The vision is for the year 2030 and that means he has to be on top until we realise that vision.
“He has proven to be a man of his word that is why as Masvingo we have seen it only fair to endorse him for 2023,” said Matuke.
Provincial youth league chairperson, Brian Munyoro said the youth were clear on where they stand with regards to 2023.
“We said and we will always say that President Mnangagwa is our choice for 2023. We will not move from that position and we will defend that position with our blood if it comes down to it. Our slogan is 2023 ED Pfee and all the party youths are behind this resolution,” said Munyoro.
The party also resolved that Chadzamira should continue as provincial chair, dashing the hopes of those who had wanted him to resign on account that he was now dangerously powerful as he now had three positions, the other one being Masvingo West Member of Parliament.