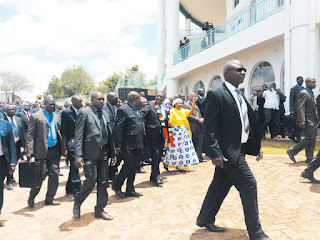 …Chamisa could be a nuisance, but price of ignoring would be dear

Upenyu Chaota
Zion Christian Church (ZCC) leader Bishop Dr Nehemiah Mutendi has challenged President Emmerson Mnangagwa to engage the opposition MDC Alliance leader Nelson Chamisa and all opposing voices for the good of the country.
Speaking in barely veiled language during the Kudzika Gomo conference at Mbungo which also doubled as his belated birthday, Bishop Mutendi, who turned 76 on September 15, described the opposition as a ‘nuisance’, but was quick to warn against ignoring that nuisance.
President Mnangagwa and First Lady Auxillia graced the event which saw members of the ZCC also praying for the rains as the rainy season approaches.
“You may call them opposition asi muzukuru (President Mnangagwa), tora zvana ugare nazvo pasi mutaurirane nekuti zvikatorwa nevatorwa hamuzozvigoni. Rambai muchingotaura nazvo chero zvichiita sepwere, ndozvinoita vanhu vakuru. Nyoka huru haizvirumi torai mutaurirane muwirirane (Initiate dialogue with those youngsters. Even though they could be a real nuisance, be the bigger brother, talk to them and reach an understanding lest they are used by detractors to make the situation impossible for you),” said Mutendi in apparent reference to creating dialogue with Chamisa.
He called on President Mnangagwa not to slam the door on dialogue and listen to the voice of the opposition no matter how silly and stupid they could be.
“Go and speak to your boys, go and speak to your people. Don’t slam the door on opposition, you have said you are a listening President so go and listen to their stories no matter how stupid and silly they may be.
“Listen, convince them. You are a sacrificial leader and a great leader must have gone through great sacrifices. You are mature enough work together the young and the old. Find positions for them in government and work together,” said Mutendi.
President Mnangagwa, in his response, seemed be both defiant and open to dialogue by saying he was in office by Devine will therefore those who disagreed with him were on the wrong side. He, however, emphasised his usual mantra that he was a ‘listening’ leader.
“All those who have seen the light have voted for me because I was chosen by God. All the leaders here on earth are chosen by God and if you side with the God-chosen leader, it means you are on the side of God.
“If you voted against me, it means you are not on the side of God but there is still time to repent and join others.
“I promise to be a listening President. I will go to the people and dialogue. Things which can be resolved we will resolve but those that are impossible we will say so. We do not want violence but we have a task to bring glory to our country,” said Mnangagwa.