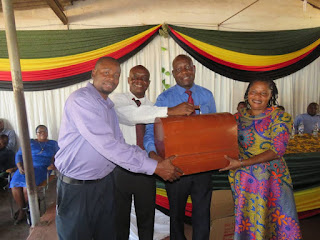 ZVISHAVANE - Shabani Mine Primary on Friday, October 19 held a farewell party for Colleta Mutambisi who is now a Zanu PF senator in the Midlands province.
Mutambisi, had been working in the education sector for 32 years and she joined Shabani Mine Primary School back in 2011 before participating in the July 30 elections as one of the party’s senatorial candidates in the Midlands province.
The farewell party was organised by the school, church members and the School Development Committee (SDC).
Speaking at the event, school head Ephraim Julius said he knew Senator Mutambisi as a humble woman who loved politics.
"We are proud of you because God has rewarded you. We will always support you senator because you have inspired the girl child," said Julius.
His sentiments were echoed by Constance Shoko, a school teacher who said Mutambisi, just like the Biblical Esther, was chosen for something great.
"You are a star that has been nurtured in difficult times but just like Esther, we have set a crown on you," said Shoko.
In her remarks, Mutambisi expressed gratitude to Shabani Mine Primary for being with her and giving her a chance to serve as a teacher even though she was also a committed politician.
"I would like to thank the current head and the former head Zingoni for the unwavering support they rendered me. They always gave me time to do my political work. When I came to Shabani Primary from Hanawa in 2011, the teachers here stood with me and comforted me when my husband was ill until he died.
"It was a long journey and I learnt to be hardworking, supportive and to be compassionate towards others," said Mutambisi.
Some parents who attended the function urged Mutambisi to always remember the school and work for its development in her new political position.
The school needs more toilets, a borehole and a play centre for children.
Mutambisi took the opportunity to donate a sewing machine and a full length mirror for the Home Economics department.