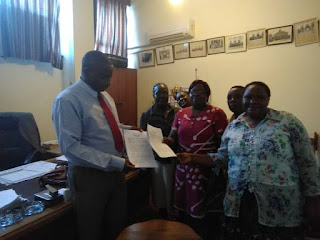 WCoZ members hand over their petition to Mayor Maboke
Clayton Shereni
The Women Coalition of Zimbabwe (WCoZ) Masvingo Chapter recently conducted a workshop at the Mucheke Hall where it was agreed that a petition will be send to council over poor service delivery punctuated by recent water shortages.
The petition was later sent to city council officials as part of efforts to force them to urgently address a severe water crisis.
Many parts of the city are now in their fourth weeks without a single drop of water coming through the taps.
WCoZ Masvingo chapter chairperson, Joyce Mhungu said it was high time the city took heed of people’s cries and took urgent corrective action.
"This situation is a threat especially to us women because we wake up in the wee hours to go out and fetch water. We are vulnerable to robbers and rapists we cannot withstand the pressure at the boreholes and water bowsers’ delivery points.
"We are going to deliver our two petitions covering issues of lack of adequate water supplies and poor refuse collection schedules to the city council leadership including the mayor, town clerk, city engineer and director of health.
Participants also slammed council workers in charge of bowser water distribution for corruption.
"We have seen some people getting water from bowsers even before the bowser had reached its destination. They give water to their relatives and friends before anybody else,” said one female participant.